Did you know Rhubarb and Custard Sweets, ironically, contain neither rhubarb nor custard?

Rhubarb and custard sweets are a retro favourite. Every good sweet shop and supermarket stock them. These red and yellow boiled sweets are a perfect balance of sweet and sour and are covered in a sugar coating. The rhubarb part of the sweet has a strong, sharp taste, while the custard side is creamy, making them the perfect treat.

You will no doubt remember buying a quarter of these hard boiled sweets in your childhood and these rhubarb and custard sweets that will no doubt make you feel nostalgic indeed! Some of the major supermarkets sell their own versions of Rhubarb and Custard Sweets such as Tesco, Sainsburys and Asda but not the branded version.

Give someone the perfect sweet hamper gift.Why not go the whole-hog with a sweet hamper? Our five tips to buying them online, you can guarantee great big smiles.

Everyone likes sweets but not everyone will like the contents of every hamper. The trick is to know what the recipient really likes and then find a hamper that matches these tastes.

Whatever their preferences, you are bound to found the perfect option if you look for it. Don’t just buy the first hamper you see, browse the full range and ask yourself “will the recipient enjoy everything that’s in here?”

If the answer is no, then you haven’t found the perfect sweet hamper!

The contents are arguably the most important feature of your hamper but you also need to spare a thought for the presentation as this is what really sets a gift apart.

When buying a hamper, you’ll notice a few different styles of basket around. The most common is the traditional picnic basket style with woven wicker material but there are other things you can try. Wooden carry baskets, complete with handles, make a great alternative and can even be painted to add a burst of colour.

With a stunning basket to hold their goodies, your recipient will effectively be getting two gifts in one and can use their basket to hold other items once emptied of all their treats.

Do yourself and your recipient, a favour and start your search as far in advance as you can. Picking the first basket of sweets you see is unlikely to prompt the same reaction as handing over a thoughtful and personalised hamper full of special treats and you should want your special someone to truly love their gift.

You’ve picked the perfect hamper and started your search early enough to ensure you find the perfect gift, but will it get there on time?

Failing to check delivery dates and times is a common error made by those ordering online. It can be easy to assume anything bought online can be deliverable within a day or two and while this is true in some cases there are other factors to consider.

Check the delivery times well in advance and make sure you place your order with plenty of time. You can always order now for a later delivery so you don’t need to worry about being premature.

When buying a sweet hamper it is all too easy to focus on the recipient and the contents and forget about the occasion. Birthdays, Christmases, new parenthood and congratulation hampers are all popular gift ideas and each can contain their own special things to represent the occasion.

With these tips in mind, buying a sweets hamper online should become easier!

The fizzy cola bottle has been named Britain’s favourite sweet of all time, a poll has revealed.

You will find them almost everywhere in sweet shops, supermarkets and hampers.

Can You Guess All The Retro Sweets?

Can You Guess All The Retro Sweets?

Can you guess all of the retro sweets shown throughout the video by ZapSweets? You must be quick though as they do not last for very long! 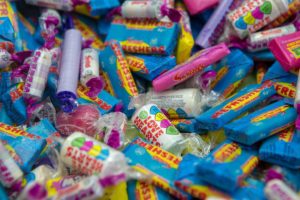 Children across the UK immediately headed for their local sweet shop after school to snap up toffee apples, liquorice strips and sticks of nougat. So here are the Top 10 Best Retro Sweets, some we may have forgotten and some we can even buy!

Small chewy sweets, Fruit Salads tasted of… well, fruit, while Black Jacks were liquorice-flavoured. Once part of the Barratt family, the Fruit Salad range of retro sweets is made with a natural, distinctive pineapple and raspberry flavour.

Originally manufactured in the Border town of Galashiels in the 14th Century, they taste just like, well, plums with a bit of a ‘tang’ to them. Like all similar items – pear drops, kola cubes – they’re sold loose and by the quarter pound, though they’re often far from ‘loose’, usually becoming stuck together in one massive pump at the bottom of the jar. See also: acid drops, boiled sweets with citric acid added for extra sourness.

Getting kids into the delights of rum (and raisin) early, the Cadbury’s chocolate bar offered an exotic taste of the Caribbean and piracy. Vanished from our shelves but came back fairly recently after a social media campaign. It was launched in 1970 and was a blend of milk and dark chocolate flavoured with rum and raisins.

Snickers, which were first produced in the US in 1930, are believed to have taken their name from a beloved horse owned by the Mars family. Until July 1990 they were sold in the UK as Marathon bars when Mars decided to change the name of the product to bring it in line with the rest of the world.

The Marathon Bar was a full 8 inches of braided caramel covered in milk chocolate. Mars introduced it in 1973 and thanks to its bright-red package and extra-long size, it stood out among the competition. Inch markings printed on the wrapper showed just how long it actually was.

The length was the result of its braided shape but it didn’t actually weigh more than standard candy bars of the time. When sales didn’t meet expectations in 1981, Mars discontinued it.

Made by chewing company Wrigley, the “Made to make your mouth water” slogan was coined by motor racing commentator Murray Walker. Opal Fruits were manufactured by Mars in the UK in 1960 and introduced in the US in 1967 as Starburst. They are now called Starburst. It was renamed in order to align it with the rest of the world and meet the global branding trend.

Not containing ham, but remarkably, tasting of a purple flower. These hard tablet-like sweets are still popular with old ladies perhaps unaccustomed to modern confectionery. A British violet-flavoured tablet confectionery manufactured by the Derbyshire company Swizzels Matlow, named after the Parma Violet variety of the flower. The sweets are hard, biconcave disc-shaped sweets, similar to the Fizzers product from the same company but without their fizziness.

Sherbet – basically fizzy sugar – has been for some reason popular with kids in many forms – the sherbet lemon, a tart-tasting boiled confection with the sweet stuff inside or the Sherbet fountain, where a liquorice tube is used to sook up the white powder. The Sherbet dab usually comes with a lollipop which when licked can be used to quickly consume the contents of what would originally have been a paper bag.

One of our favourite sweets ever, and such a classic! If you need your memory jogging, they consist of a yellow tube filled with white zingy sherbet. It is surrounded by a yellow and red paper wrapping which allows the liquorice to just poke out the top. The idea of the sweet is to dip the liquorice in the sherbet and eat. There are other ways to eat it. If the liquorice is hollow, you can suck it up, you can use your fingers, inhale it, you can add it to water.

They used to be in a cardboard tube and have the liquorice stick poking out, but the whole shebang is now encased in plastic.

A rare Christmas treat that was basically an e-cig in reverse. These usually consisted of sweet candy fake cigarettes and chocolate cigars (and a chocolate ashtray). Fake pipe tobacco (made from coconut) was another option.

Also known as UFO Sweets, again offering your tongue a taste sensation, the rice paper UFO filled with sherbet was named the most popular sweet of all time in a 2004 poll.

Flying Saucer sweets are an all-time favourite which dates back to the 1960s. Appleton Sweets stock a range of wholesale flying saucer sweets in various quantities and flavours. The sweets are made with rice paper which is shaped like discs and filled with sherbet. A fizzy, fruity flavour sherbet in a colourful wafer shell.

In 2004 they were named as the most popular sweet with their tasty edible rice coating and sour sherbet flavours. They are a real blast from the past and their fizzy, sour sherbet makes them an exciting choice of sweet. Flying Saucers are a fantastic choice for a gift or as an exciting treat for children and are popular at all times of the year. They remain a popular sweet in Belgium and the United Kingdom.